Before you watch the video below, here’s additional context for what inspired the video so the opening of the video doesn’t confuse you. In Singapore, McDonald’s released a burger called “Ninja Burger” with charcoal buns and fried chicken coated in Nanban sauce, which is based on the dish Chicken Nanban. Not very satisfied with the nomenclature of the burger, this gave me the question: what would a Ninja Burger actually taste like?

The rest of this post is written with those who do not know of the burger in mind.

The basic idea of a ninja should be pretty clear to most people: highly trained assassins clad in black who perform covert missions with inhumane dexterity and specialised tools like shuriken and kunai. Ninjas were also expected to have incredible stamina for long-distance scouting missions, where they have to endure having little to no food.

The Bansenshukai – a “how to be a ninja” manual dating back to 1676 – contained instructions for “hunger pills”, with a “Hyourougan” (兵糧丸) recipe.

(bu, ryo, and kin are old Japanese measurements for length, mass and volume)

All that was required was to mix everything together, forming ping-pong ball-sized pills that suspiciously look like rabbit poop. These were meant to be nutritionally dense food to keep ninjas fueled while on the mission. If you have played or watched any ninja-related shows or games, you might have heard of these pills before.

In the Sekiro game, Pellets restore vitality over a short period of time. In the Naruto anime, Hyourougan is a stimulant and depressant that allowed the user to continuously fight for three days and three nights without rest.

Of course, real-life Hyourougan isn’t as powerful as in fiction. One ball is only approximately 300 calories, with some recreations on the internet mentioning that Hyourougan tasted like “cinnamon and sugar” or “dirt and ginseng”.

Doesn’t sound very appetising, but today, I come with a mission to make a Ninja Burger.

Nowadays, rice burger buns are a popular alternative to wheat buns, which makes my task easy. 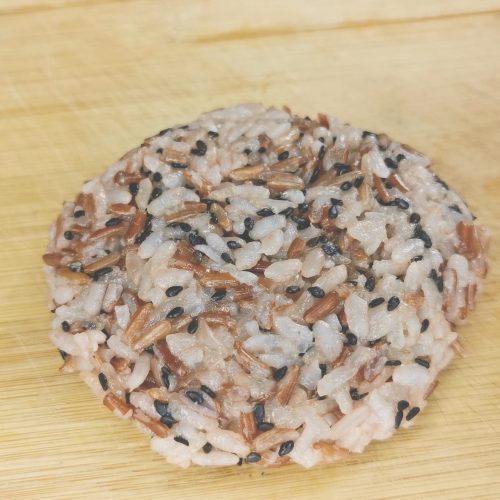 Back in those eras where Ninjas might have existed, polished white rice was more expensive than unpolished (brown) rice. Using brown glutinous rice and brown short-grain rice is technically more historically accurate but then again who made rice burgers back then.

It’s a bit hard to find brown glutinous rice, so I’m using a 1:1:1 ratio of glutinous:brown:short-grain rice instead. This also has the additional effect of looking prettier with the variation in colour. Sesame seeds and oil are for flavouring purposes, as the burger might not be flavourful enough otherwise.

The remaining ingredients are workable as a patty as long as adjustments are made so the flavours are actually palatable. Removing the harder to find coix seed, I end up with: 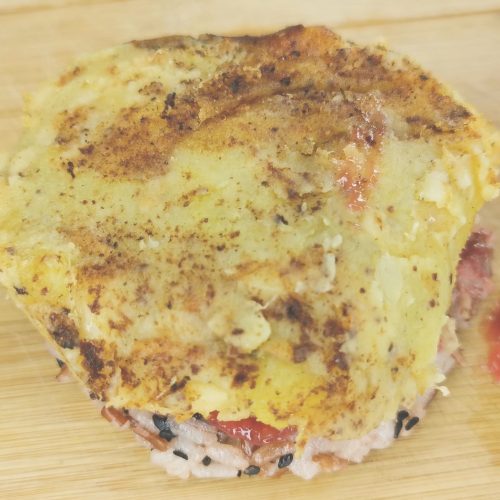 Wait, wasn’t the filling supposed to be yam and not sweet potato? Well… yes. This was because I made a mistake while researching.

Like in this CIA document, it is mentioned that “mountain potatoes” were used as ingredients. In Japanese, sweet potatoes are “Satsuma Imo” さつま芋, yams are “Yama Imo” 山芋, and Taro, another type of yam, is ”Sato Imo” 里芋, with “Imo” 芋 referring to tubers. While alternating between Hyourougan recipes from Japanese and English sources I got confused and thought yams and sweet potatoes were both used for Hyourougan.

Sweet potatoes were only introduced to Japan in the early 17th century by the Portuguese, so it’s not far fetched to say that ninjas ate them. But as for Hyourougan recipes, that’s probably another matter. The good news is they should still cook the same.

As for derivation of the recipe, there are many recipes online for “Makhana Aloo Tikki”, which are Indian Lotus Seed Patties. That served as a good base for the patty recipe, except I skipped the batter.

While we have successfully made the minimum requirement to form a burger, the above would be too dry for a proper burger eating experience. Which brings me to the sauce.

Besides the Hyourougan, there were also other recipes, with one being the Suikatsugan 水渇丸 (thirst-quenching pill).

The simplest version of the Suikatsugan is made only from mondo grass, umeboshi (Japanese pickled plums), and sugar. It is said to stimulate the ninja’s saliva glands and help with hydration, allowing them to live without water for 45 days. Which uh… is probably an exaggeration.

Knowing that eating rice with Umeboshi is a pretty classic flavour combination already, and removing the hard to find mondo grass as an ingredient, we can make an Umebishio sauce with simply Umeboshi and sugar. 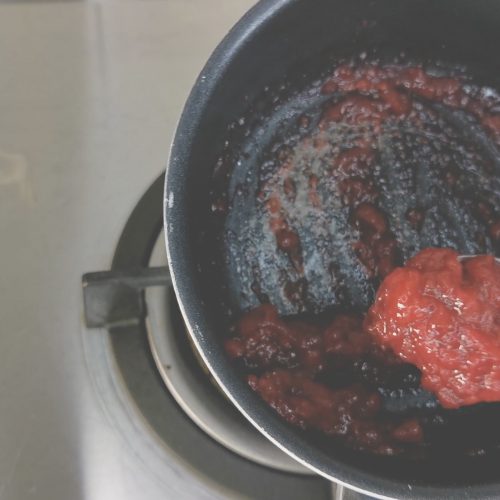 Mirin above is sort of an optional ingredient for Umebishio. Some recipes also call to soak Umeboshi for hours before using to remove the saltiness, but I just used them straight.

Having completed the above three, simply assemble (bottom rice bun, then patty, then Umebishio sauce, and another rice bun) and eat. 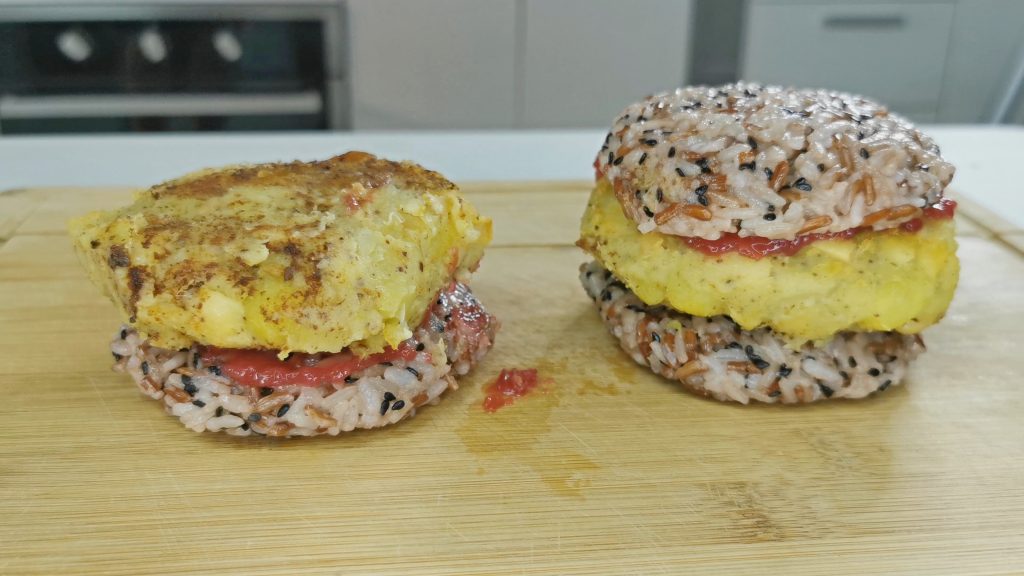 The result was a lot better than I initially expected and was actually delicious, being somewhat between sweet and savoury. The Umebishio is very sour by itself, but eating everything together brought out the nuttier flavours from the lotus seeds and sesame.

Obviously, ninjas didn’t eat burgers or had the concept of a burger back then. So this was really meant more as a fun interpretation and experiment.

In fact, the existence of ninjas the way we know in pop-culture is pretty debatable and is likely to be highly exaggerated (the thing about going 45 days without water might have clued you in on this). There are also certain dubious bits of info like ninjas avoiding pungent food for fear of being sniffed out by the enemy.

Much of what we know about ninjas are from storytellers and historians, and it is likely that ninjas didn’t exist as a distinct group of people. There might be people with the skills of a ninja and occasionally did ninja things, but there weren’t things like ninja clans or secret organisations that trained ninjas specifically. More info on this can be found in the subreddit AskHistorian’s wiki.

In the case that you want more related readings,