Disclaimer: I earn a small commission from Amazon links in this article. These come at no additional cost to you.

Slow-cooked Bamboo Shoot Soup, or 腌笃鲜 Yān dǔ xiān, is a dish that came from Anhui Cuisine (徽菜 Hui Cai). Though, the dish is more popular and associated with Shanghai.

It’s a simple dish with only 3 main ingredients, which some say is represented by the 3 words in the dish name.

腌 Yān can be translated to marinated, cured or pickled, and this refers to Chinese ham. I’m using Jinhua ham, which is considerably saltier than most hams.

笃 dǔ can mean sincere or genuine. Some say the prefix of the word, the “bamboo prefix”, refers to the bamboo shoots. But actually, 笃 dǔ is transformed from 炖 Dùn, meaning to stew. In Shanghainese, 笃 dǔ and 炖 Dùn have the same meaning; to stew. While in the original Anhui cuisine, the dish is called 腌炖鲜 Yān dùn xiān.

The last word, 鲜xiān means fresh, and it refers to fresh meat.

Together, the name of the dish means cured and fresh meat slow-cooked together.

Because the basic step is mostly throwing everything into water and boil for a few hours, the quality of the ingredients affects the taste of the dish more than anything. This is the reason why Zhongli’s version of the dish in Genshin Impact calls for very specific ingredients; meat freshly hunted in Springvale, bamboo shoots harvested from Qingce Village, and ham that meets the Yuehai Pavillion’s gourmet standards.

For a dish that can be described as “throw everything in a pot”, the prep is actually quite particular. 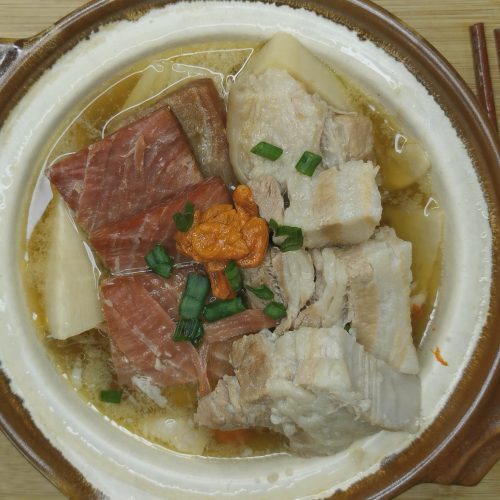 A story behind the dish

The story goes that Hu Xueyan, a famous businessman in the 1800s loved to eat salted meat (咸肉) and would always have them ready at home. At the time, Yan Du Xian in Anhui cuisine used cured ham (腊肉, uhhh my translation could be wrong here).

Zuo Zongtang (aka General Tso) happened to smell the salted meat and followed the scent to Hu’s house. With the sudden visit, Hu was forced to prepare something for the guest, but he only had lots of salted meat.

The above sounded like half-myth that is possibly rooted in some truth, but I wasn’t able to find many sources confirming this to be a common legend. So, I didn’t include this legend in the video.

Additionally, many dishes with long history basically have the same story template except changing character names and time period. These also read more like stories or fairy tales rather than facts.

For example, Jewelry Soup, or 珍珠翡翠白玉汤 in real life “pearl, green jade and white jade soup”. The Hongwu Emperor (1368-1398) was a wandering beggar and fainted in the streets. A random old lady helped him up and used leftovers (tofu, spinach and rice) to make a soup. Dude thought this was some good shit and the dish name later spread across the country.

Perhaps it would be possible to study the migratory patterns and follow the foodways of salted meat, but for now that’s enough history.

Like what you read or watched? Support me by giving a small donation at Ko-fi!