If anybody wonder in the upcoming weeks why people are carrying and buying bottles of McDonald’s curry sauce, you’ll understand after reading this article.

I would even go so far as to say those are the reasons to visit McDonald’s and not anything else on the menu. Or maybe I just like sweet things and I’m inclined to like anything with sugar in it. Don’t judge.

But less of me, and more of facts.

The entire McDonald’s Curry Sauce tragedy that can be found from sm ong. You can also browse it on Reddit r/Singapore if that’s what you prefer. Here’s a modified summary that I also wrote for GoodyFeed:

What is McDonald’s Curry Sauce?

Curry but not really curry. Some has described it to be similar to German Curry Ketchup or Currygewürzketchup, though looking at the ingredients, it’s likely that they are similar recipes/products with rather different tastes.

It’s sweet, but only very mildly spicy, with a nuttiness that makes it kind of like a cross between satay and Japanese curry.

In case you’re doubting my taste buds, a recipe by iEatiShootiPost uses packaged Japanese curry roux cubes and peanut sauce as an ingredient. And this also explains why the weirdos at SoraNews24 made Japanese Curry with McDonald’s Curry Sauce.

No one knows what the nutritional value of McDonald’s Curry Sauce is, but the ingredients include some spices used in curry, like Turmeric and Chili Pepper.

So how do we eat it? Dip nuggets in it, dip fries in it, pour it on burgers. Nobody really cares, just use it as you would ketchup.

This was the day McDonald’s released the following statement:

Before the statement, people already started noticing that some stores stopped giving the sauce. After the official statement, people started the #ripcurrysauce movement on Twitter. Surprisingly, there were a lot of comments asking for Mayo on the McDonald’s Facebook announcement.

“It’s more saddening than the death of Steve Jobs.”

Notably, it reveals that the sauce is made in the US, despite the sauce being not available there.

About 1 week later, the curry sauce is back.

Except… it didn’t taste the same. People commented the new one is sweeter and more diluted.

The ingredients used were clearly different; the new one used soy beans and soy butter, while the old version had peanuts, which McDonald’s claim to be for allergy sufferers.

Not only that. We were also no longer allowed unlimited curry sauce privileges. And if you wanted more, you had to pay S$0.30.

Speculation: Why McDonald’s changed the recipe

There’s 2 reasons for this, though it’s all speculation.
First thing to mention for anything corporate would be price. Just checking online I don’t think the prices differ too much. Soy might even be slightly more expensive, assuming a 1 for 1 substitute. But then again, the pre-2011 recipe had both soy sauce (made from soy beans) and peanuts, so maybe if they make soy sauce in house it’s overall cheaper.
You know how there are labels on packaged food that says “may contain traces of nuts”? As long as food is produced in the same production line, the factory needs to put that for other non-curry sauce products as well, because there is a chance for small traces of peanuts or soy. Peanuts and soy are both top 8 allergies that people have in the US. Instead of having both, why not eliminate one so more people can enjoy products produced by the factory? Again, it’s all speculation since I don’t really know what else they produce there.
I could be wrong on both, but they seem plausible to me.

After a relatively peaceful 4 years, the sauce once again disappeared, this time due to a congestion at the United States West Coast ports.

Unlike the 2011 incident, people during this period were a little more civil, but there was clear unrest within the population.

Issue seems to have been resolved, curry sauce back to menu.

See also  Bees are fish because of almonds, which isn’t vegan

McDonald’s started selling 375ml bottles of the stuff for S$4.50, limited to 4 per customer, Purchase with Purchase. 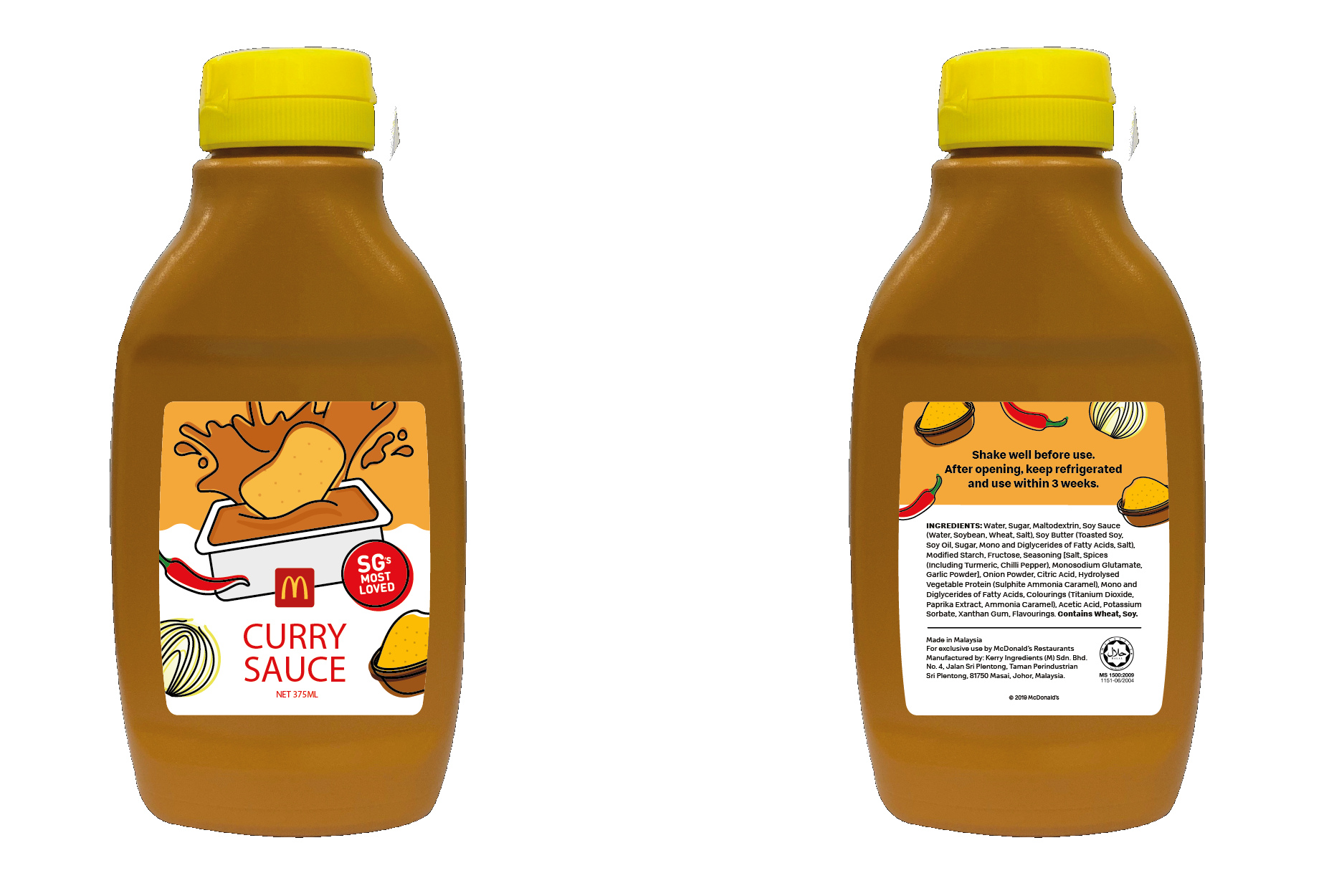 Nobody knows whether this was a good thing. McDonald’s were clearly using our addiction to the drug to fuel their corporate greed.

Local addicts didn’t care. It was apparently sold out in a week or two.

If McDonald’s knew how to do anything, it was marketing and controlling supply. Nearly 3 years after the previous sold out, thirst for the sauce is once again, at its height. Bottled supplies of the sauce run low. The July 2016 stock were basically non-existent at this point, and addicts had nowhere to go to.

I worry of the time curry sauce goes out of my economic capacity, but for now I can only pay up and pray McDonald’s don’t decide to bankrupt me by preying on my addiction.

To McDonald’s: If the curry sauce sells out again, it’s clearly totally all me. I demand a commission.

A mere 5 days after the release, the curry sauce has sold out. And for the work I did, I have received no commission.

And perhaps worse than that, no curry sauce either.

I warned people of the fact that the evil M was trying to squeeze our money. But I was wrong.

It turned out that the real evil was among us all along.

People saw the mass of addicts and decided that time was prime for a killing. These had no desire for the golden curry sauce, but they had a had desire for another equally golden, shiny object called money.

The black market hoarded the curry sauce to resell them for twice the S$5.50 price tag to addicts willing to fork out the price tag. One such mastermind even had 79 bottles of the goods.

As of writing, this particular merchant was left with 53 bottles.

I cry for my fallen victims who don’t realise that the curry sauce bottles, at 375ml, is technically more expensive than the packets at 25 grams.

Perhaps the another update will be expected when September 2019, the date of expiry for the curry sauce, nears.