The following image has been spread around and reposted again and again across various sites, with the claim that there are vulture bees making honey from animal carcasses. Called ‘corpse honey’ or ‘meat honey’. 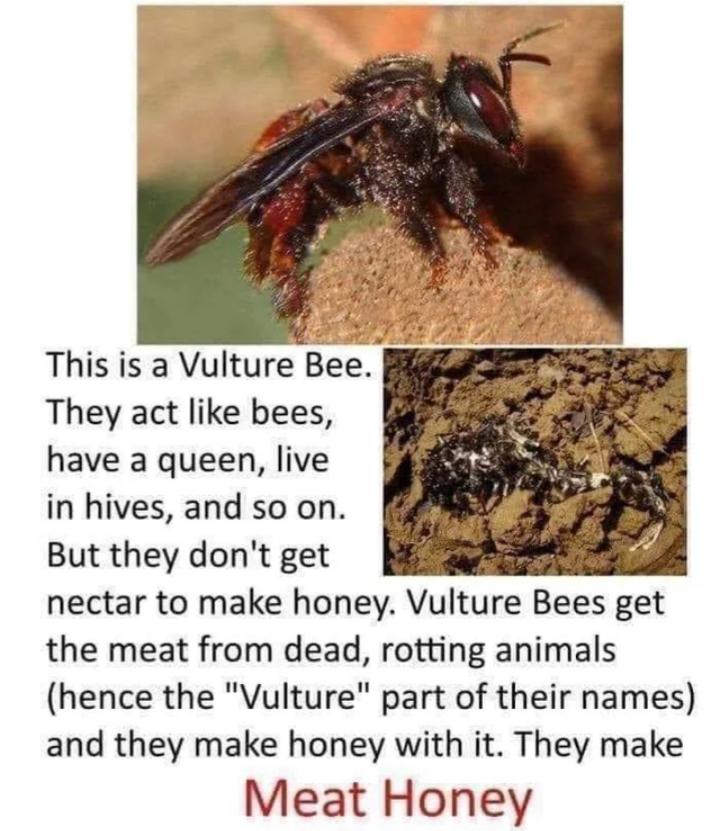 First off, the bee in that jpeg isn’t a vulture bee. That’s Trigona spinipes, a stingless bee, but not a vulture. It’s the exact same image used in another Wikipedia article.

Vulture bees are still real, but this is what one species of them look like. (There are 3 species that we know so far.)

And I’m sorry to say but, meat honey isn’t true. Vulture bees still produce honey (the normal, golden type we can find in our supermarkets) by collecting nectar. They simply eat the meat and store the rotting flesh in their hives.

And we have to talk about this misinformation.

Haven’t you found it strange that despite how proliferous the top image is, there isn’t an image or video clearly showing vulture bee honey or someone eating it?

There are way too many blogs and sites to call out every one of them, but there is one particular source that nearly everybody and every blog will definitely use: Wikipedia.

In particular, two sentences stood out:

Vulture bees produce a honey-like substance which is not derived from nectar, but rather from protein-rich secretions of the bees’ hypopharyngeal glands. These secretions are likely derived from the bees’ diet, carrion eaten outside the nest.[1]
— Wikipedia

The flavor of this honey-resembling substance is described as intense, smokey, and salty, or uniquely sweet.[4]
— Wikipedia

Let’s examine the 2nd sentence first, with attribution to MisfitAnimals.

Here are the paragraphs in question: 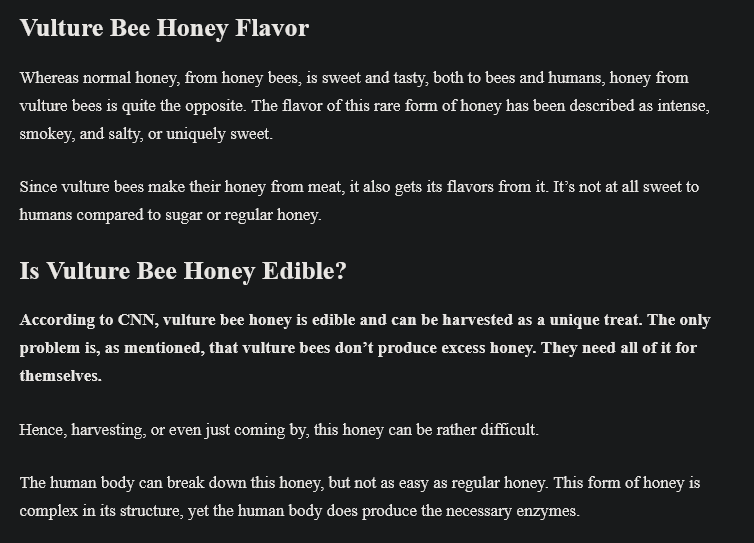 Further below on the site:

Ah, no sources here. Some people find the taste to be unpleasant? We’re using “some people” as a source now? Really?

Now, there is indeed a source to CNN above, which MisfitAnimals did not kindly link. My best guess is this particular article where CNN interviewed a doctoral student from the original research article.

The problem: nowhere in that CNN article was it mentioned that vulture bee honey is made from meat.

Though they feed on flesh, the researchers said that the vulture bees’ honey is still sweet and edible.

“They store the meat in special chambers (in their hives) that are sealed off for two weeks before they access it, and these chambers are separate from where the honey is stored,” said Jessica Maccaro, a doctoral student at UC Riverside who also took part in the study, in the statement.
— CNN

Ah, so the stored meat and honey are two separate things? How was this even interpreted to be a singular “meat honey” in the first place?

Perhaps I was too quick to judge. Perhaps MisfitAnimals travelled all the way to the Neotropics and invited some people to try vulture bee honey. They just simply forgot to take a picture or video on an expedition that would require thousands of dollars or something, I don’t know.

Let’s check their about page. 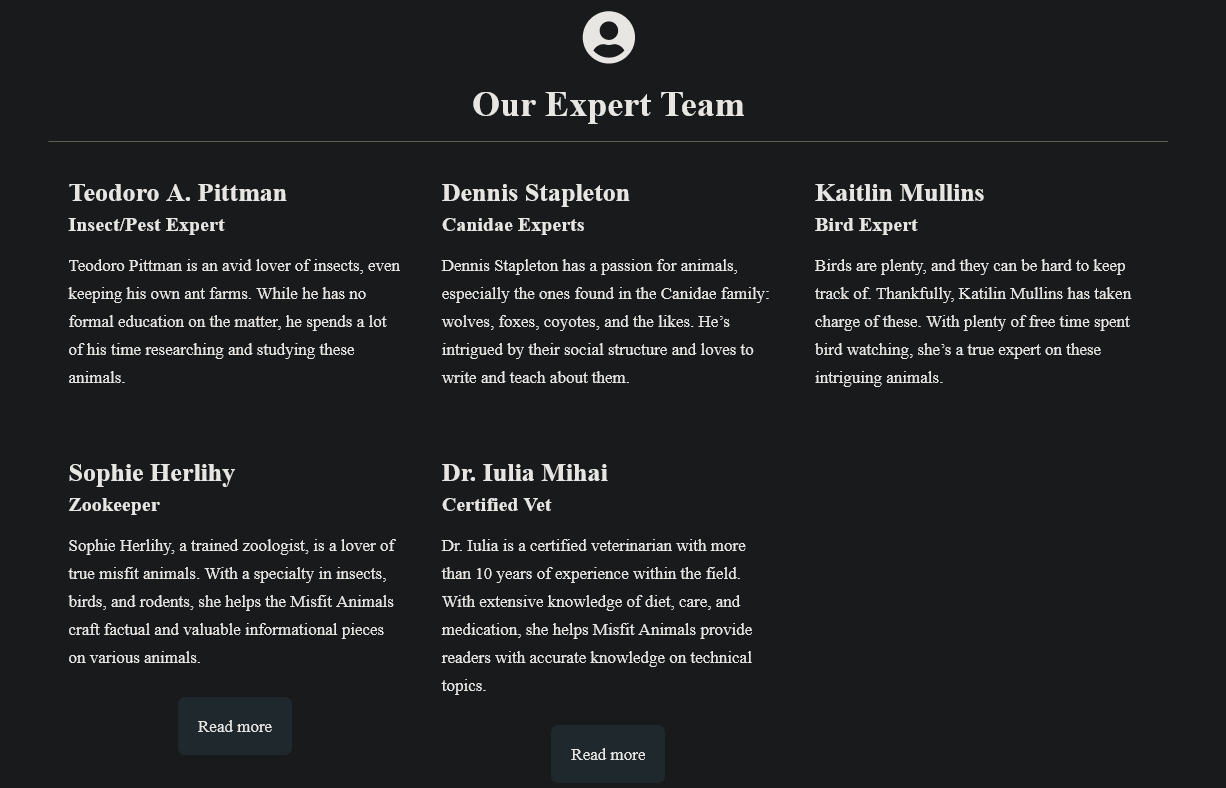 Very interesting. So the writers for MisfitAnimals were neither bee experts nor interested food writers. We have a certified veterinarian and a trained zoologist, but the other three were simply people who liked animals and then named themselves an expert.

Their Insect/Pest Expert has no formal education on the matter, and despite the claim from the website to provide sources, they just… didn’t.

And oh, despite linking the study, they also made another factual error.

What Type of Bees Eat Meat?

No, not the only known species in their subfamily. The study clearly states there are THREE SPECIES OF VULTURE BEES.

However, obligate necrophagy has been found in only three closely related Trigona species in the neotropics: T. hypogea (Silvestri 1902), T. necrophaga (Camargo and Roubik 1991), and T. crassipes (Fabricius 1793) (10).
— ASM Journals

MisfitAnimals also used the following image of a bee: 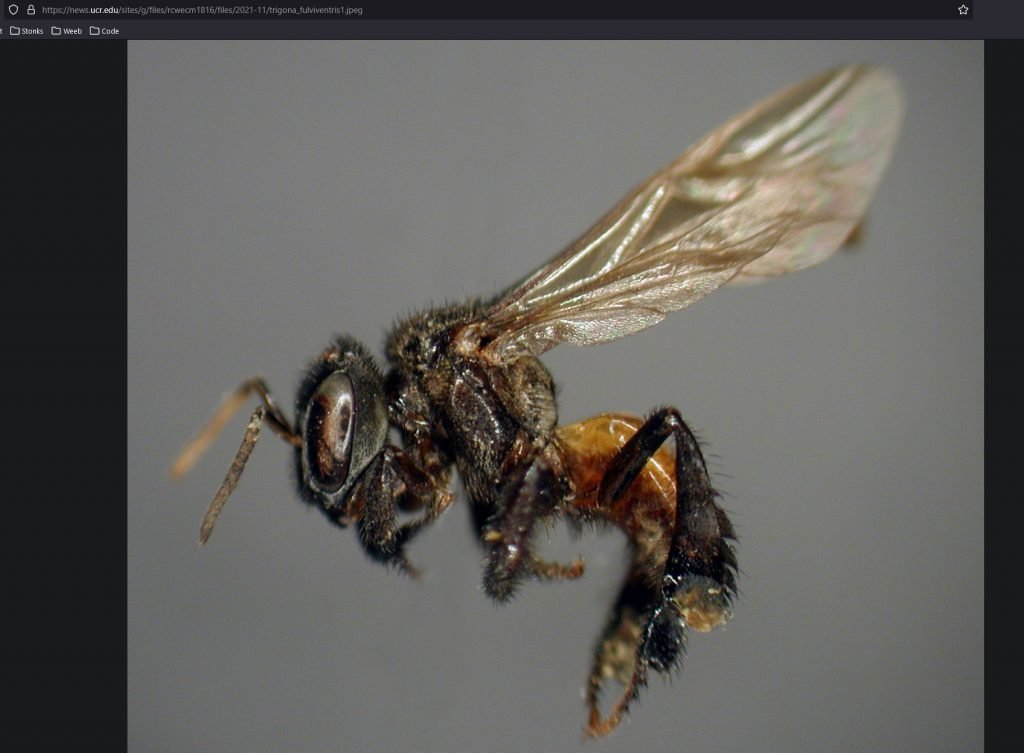 The problem? This particular image is of the Trigona Fulviventris species which is a stingless bee but not a vulture bee! You can even see this species name in the jpeg file name in a site that MisfitAnimals linked to (and presumably downloaded from).

… and they captioned it “Vulture Bee”.

Yikes. I guess they didn’t love animals enough to read.

In other words, Wikipedia used a source with zero credibility and poor comprehension skills.

Vulture bees produce a honey-like substance which is not derived from nectar, but rather from protein-rich secretions of the bees’ hypopharyngeal glands. These secretions are likely derived from the bees’ diet, carrion eaten outside the nest.[1]
— Wikipedia

This is a case of bad summary and writing.

Wikipedia does the right thing by linking the original research article in 2021, but down here the paragraph clearly states that there are TWO competing explanations for how the bees use the flesh.

There are two competing explanations for how the obligate necrophages use carrion. Noll et al. reported that T. hypogea chews flesh from the carcass, transports the flesh back to the colony in its crop, and deposits the flesh in wax pots where it is then mixed with honey; this mixture of honey and flesh then matures over a 14-day period into a paste rich in free amino acids and sugars (11). Roubik, Buchmann, and coworkers hypothesized that young workers use the consumed flesh to produce hypopharyngeal gland secretions, much like honey bees (13). In the latter scenario, it is the hypopharyngeal gland secretion that the colony stores in pots. Regardless of how they consume flesh, the obligately necrophagous stingless bees have abandoned their ancestral mutualism with flowering plants and earned the moniker “vulture bees” (14).
— ASM Journals

In plainer English, the first explanation is that vulture bees store flesh in wax pots, and mix it with honey to become a paste. If this did exist, this could arguably be called meat honey.

The second explanation for how vulture bees use the flesh is that they eat it to produce hypopharyngeal gland secretions, which would put it closer to Royal Jelly, a secretion used to feed the Queen bee and larvae.

Now, I’m not too sure why these are competing explanations. Like, why can’t the bees use meat to do both? But in any case, it’s pretty clear we’re still not quite at the stage where we can start wondering if it is possible to feed bees things like BBQ ribs, fried chicken, or beef bourguignon to elevate our food fetishes to the next level.

Because the explanations clearly debunk the “not derived from nectar” statement on Wikipedia. It would also debunk the viral image stating that vulture bees “don’t get nectar to make honey”.

Combined with the statement that CNN took from the doctoral student (that the meat is stored in special chambers that are separate from where the honey is stored), this means that as far as confirmed, it’s not meat honey. It’s meat and honey.

We just haven’t confirmed what the meat is used for yet.

Also, if meat honey did exist, it can probably kill you.

But okay. Let’s say that we use the same logical reasoning as “jail is just a room” and “a computer is just a box”. Let’s call whatever the vulture bees does with their meat “meat honey” even though the naming doesn’t make sense.

In a Tumblr blog by a PhD student and bee neuroethologist from Australia, the post says that “as of yet no one has tried this honey because it probably would kill them or at the very least make them sick”.

Now, the poster’s research doesn’t seem to be revolved around vulture bees. And to be sure, a Tumblr blog wouldn’t make for a good source. Still, it sure is more reliable than a website that used the wrong image for the very thing they are talking about but happened to have better search engine optimisation.

Wait, so what did we know about vulture bees again?

Keep in mind: I’m not a scientist or bee expert. Just a fat boi who wanted to know more about meat honey.

Scientists have placed pieces of raw chicken meat to confirm that there are three species of vulture bees, so far, that exclusively eat meat for protein:

The purpose here is to understand the gut microbiomes of the bees, which did confirm to be different from the usual vegetarian bees and instead much more similar to vultures like hyenas and other carrion feeders. Without these microbes, they could die from eating carrion.

But during the experiment, they also discovered 3 separate species of normally vegetarian bees interested in the chicken.

And the gut microbiome of these omnivore bees is also slightly different compared to the vegetarian and vulture bees.

Wait, are you telling me there are MORE BEES THAT CRAVE FOR MEAT?

Yes, but if we look back to history, this shouldn’t be a huge surprise. Bumblebees were documented harvesting meat as far back as the 18th century.

You see, bees and wasps share a common carnivorous ancestor, and you can consider bees as essentially vegetarian wasps. To survive, bees get carbohydrates by feeding on nectar and getting protein from pollen. What makes vulture bees unique is that instead of feeding on pollen, they feed on carrion exclusively as a protein source.

This evolutionary difference can be seen in the hind legs which have a reduced pollen basket compared to vegetarian bees. (My non-expert eyes can’t tell the difference either, don’t worry.)

And that they have mandibles capable of tearing off flesh. 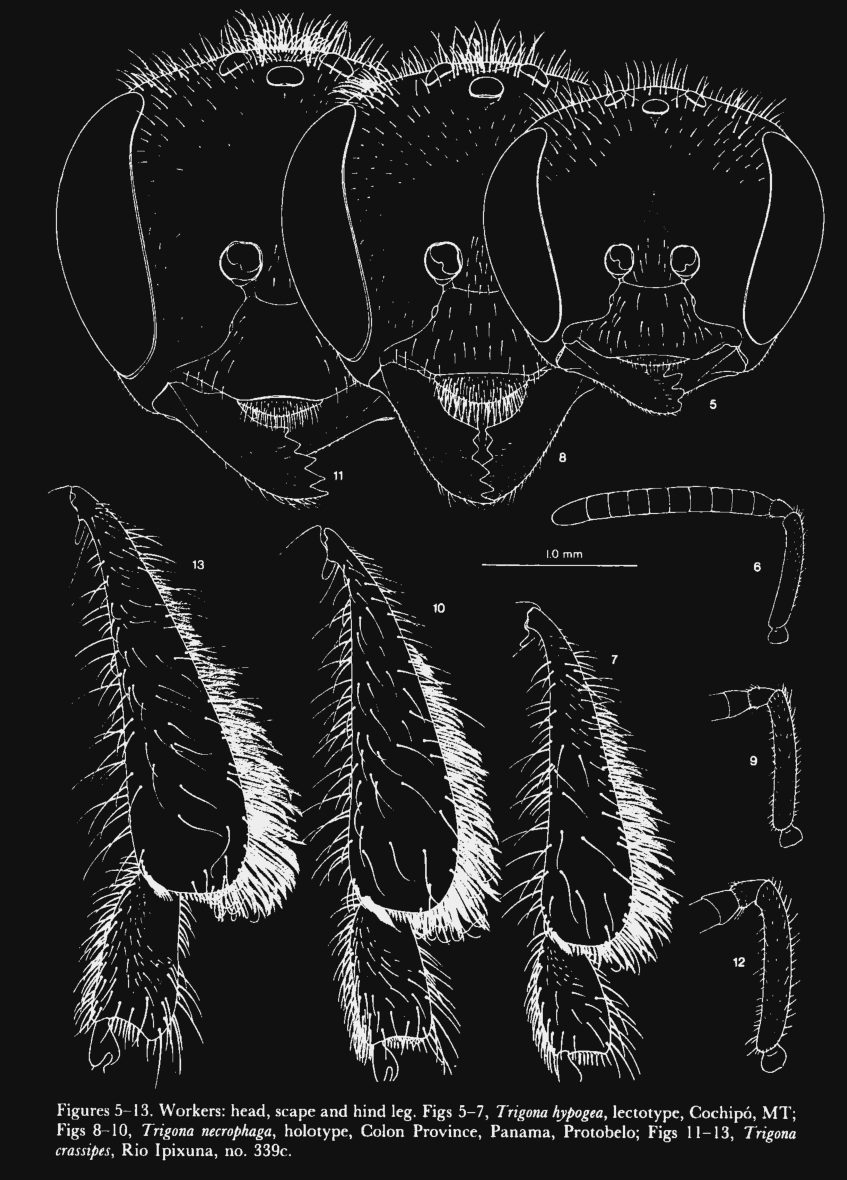 The study that I got this also seem to observe that the wax pot for Trigona Hypogea contained honey, but the two other species of vulture bees seem to also contain some other kind of paste in the wax pots.

So maybe there is still hope for meat honey. In any case, I hope this was at least helpful in correcting some myths by using the power of the internet. At the very least, know that sites with good SEO (search engine optimisation) don’t necessarily make credible sources.

Which is a good time to mention that this site is operated by just a fat boi (just me) and will probably get lost on the 97th page of Google search.

If you appreciate the article, consider sharing it or perhaps donate a cup of coffee on ko-fi.

(Or in the midst of this inflation… more like just a cup of water.)

RESEARCH PAPERS that you will find too long to read