This post may contain affiliate links. As an Amazon Associate, I earn a small commission from qualifying purchases at no additional costs to you.

Cerberus, the gatekeeper of the underworld, is the three-headed hound of hades as depicted in popular fiction we can find today. The earliest descriptions of Cerberus depicted it with fifty to a hundred heads. Later descriptions would show him with three, sometimes furnished with a mane of venomous snakes. Some theorised that the snakes were counted as part of the initial 50-100 heads.

Surprisingly, there weren’t many written myths on Cerberus despite its popularity. In this post, I’m only looking at the references containing honeycakes.

The legend of Aeneid, a Latin epic poem between 29 and 19 BC, contains one reference to honey cakes in book 6, where Aenaes encounters Cerberus guarding the entrance to the underworld.

Made all the region ring, as there he lay

At vast length in his cave. The Sibyl then,

Seeing the serpents writhe around his neck,

Threw down a loaf with honeyed herbs imbued

And drowsy essences: he, ravenous,

Gaped wide his three fierce mouths and snatched the bait,

Crouched with his large backs loose upon the ground,

And filled his cavern floor from end to end.

Its warder buried; then he fled that shore

In plain English. the Cumaean Sibyl, who was serving as his guide, threw a loaf with honeyed herbs to Cerberus, drugging it to sleep and allowing Aeneas to sneak past.

This story later gave rise to the idiom “a sop to Cerberus”, meaning a “bribe”.

There is also the story of Cupid and Psyche written in the 2nd century AD by Lucius Apuleius Madaurensis.

In Psyche’s quest to the underworld, she was given the advice to carry cakes of honeyed barley in both hands, and transport two coins in her mouth. The cakes to distract Cerberus, and the two coins for Charon the ferryman.

The airway of Dis is there, and through the yawning gates the pathless route is revealed. Once you cross the threshold, you are committed to the unswerving course that takes you to the very Regia of Orcus. But you shouldn’t go emptyhanded through the shadows past this point, but rather carry cakes of honeyed barley in both hands,[14] and transport two coins in your mouth.

In Ancient Greek, placing coins with the dead was practised as part of their burial customs – called Charon’s obol – many such coins can be found in burial sites.

A honey cake was also given to the deceased as part of the rituals, though whether this was specifically meant for Cerberus isn’t confirmed.

(I didn’t put this portion in my video, as this wasn’t relevant to Cerberus.)

A “melittouta”, translated into a honey-cake, was also briefly mentioned in Aristophanes’ comedy Lysistrata (411 BC).

But the old man will often select—

O why not finish and die?

A bier is easy to buy,

A honey-cake I’ll knead you with joy,

This garland will see you are decked.

I’ve a wreath for you too.

I also will fillet you.

What more is lacking? Step aboard the boat.

You’re keeping him, he wants to shove afloat.

Problem was, I couldn’t find a recipe for “melittouta”, so knowing the name isn’t worth much. Relevant images of Lysistrata contains images of giant penises, so that’s something to know I guess.

What about Placenta cake?

In the game Arknights (which was what inspired this research), the Cerberus inspired character’s Ceobe’s favourite honey cakes looks like Baklava. While I think most wouldn’t consider Baklava a “honey cake”, this was worth looking into.

Baklava has several origin stories, but I’ll only be looking at the Greek origin: Placenta cake.

In De Agri Cultura, a notebook dating to about 160 BC, a recipe for Placenta is as follows:

So to make Placenta cake, you basically form a cake shape by alternating between thin layers of dough and a mixture of cheese and honey. Then bake the whole thing.

Though it does use honey, it feels more like a cheesecake than a honey cake. Don’t know about you, but this doesn’t fit IMO.

Now that we understand the context, let’s find some recipes.

In the bakeries found in Pompeii, the ancient city buried by the eruption of Mount Vesuvius in AD 79, there is a painting of what seems like a cake, garnished with some things. 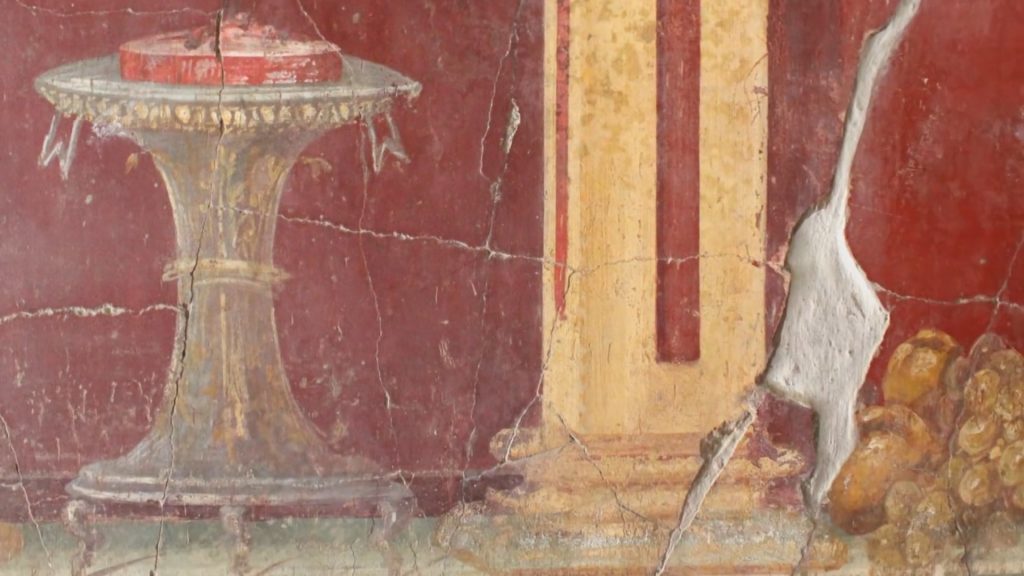 So we know that for the most part cakes haven’t changed that much in appearance… not counting the everything is cake meme.

As for the taste, sugar wasn’t invented back then, and honey was the main sweetener used for most food. What is this means is that the description of honey cakes really don’t tell us much.

In the journal article “Cakes in the Liknon: Votives from the Sanctuary of Demeter and Kore on Acrocorinth”, there is a list of cakes, with about half of them containing honey. It’s like we just went into a cake shop asking for “sugar cake”.

But we do have some clues.

We do know that the honey-cakes in Cupid and Psyche is made of barley. One depiction of barley cakes can be found in a 7th-century medical encyclopedia written by Byzantine Greek physician Paulus Aegineta.

The Maza, as Zeunius explains it, consisted of the flour of toasted barley

ponnded with some liquor, such as water, oil, milk, oxycrate, oxymel, or

commends the Maza, or Cake prepared with milk, as an article of food during

Of note is that barley was considered one of the less desirable grains, and are often eaten by the poor. Wheat is preferred by the rich, because it contains gluten giving cakes and bread better texture, and has lighter colour.

Maza, made with barley, was the everyday food of Athenians as it does not require much preparation or ingredients to make.

Honestly, having recreated Maza, I wouldn’t say it tastes delicious or anything. It tastes exactly as the ingredients suggest: imagine toasted barley with honey. Somewhat like a granola bar, and I wouldn’t exactly go crazy for it.

Then again, I’m not a three-headed dog. Or maybe Cerberus just really likes honey and the “cake” part doesn’t matter… who knows? 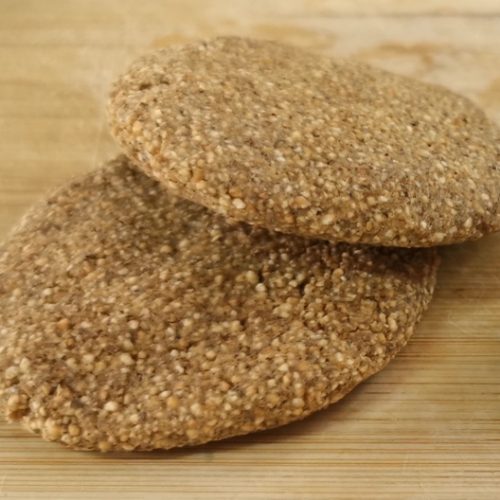 I don’t recommend making Maza, unless you want a taste of what being poor in Rome is like.

Now this one is more suitable to be named the honey cake for Cerberus.

The Western World’s oldest cookbook, Apicius, contains several dessert recipes containing honey. Sadly, it is quite lacking in desserts and bakery despite the significance of those two in Ancient Greece and Rome. So there could be a lot more honey cakes to be discovered… but we’ll have to make do with this for now.

Here’s one translation for Aliter Dulcia, which translates to “another dessert”,

Mix pepper, [chopped] nuts, honey, rue and raisin wine. Cook in milk and pastry. Thicken with a little egg and bake. Pour honey on top, sprinkle [with filberts] and serve.

As the name suggests, there are several other cakes with a similar method of preparation. “Dulcia” is the generic name for “sweets”.

There are many translations of Apicius available. The translation I’m using (by John Edwards, I couldn’t actually find this particular translation on Amazon) also provided a recipe with measurements, but there is some context needed for the ingredients.

You might have noticed that pepper is the first ingredient here, which is probably something unexpected for a cake. This particular translation notes that the Romans used the word for “pepper” extensively and used it to include other spices like cinnamon, cardamom and nutmeg.

The strange thing is, this isn’t mentioned in other online sources. In some online recreations, people just seem to straight-up use pepper (!!!!). Those that use cinnamon don’t mention why they do so.

For me, I’ll be sticking to cinnamon.

The nuts in Apicius seem to refer to pine nuts, almonds and hazelnuts. Filberts here refer to hazelnuts.

Rue is a herb with quite a bitter taste and also used as medicine. It isn’t used commonly today and may be hard to find, but rosemary is considered a substitute in most recipes.

Raisin wine here refers to Passum, which is the ancestor of modern Italian Passito wines and French Vin de Paille. Both are a little out of the budget for this smol content creator, so I’m using regular white wine.

As mentioned in the Maza section, regular white flour made from wheat is worth considering if you wanna eat like a rich person.

As for me, I wanted to try using spelt grains and grind them because the grain was specifically mentioned in another recipe, but I couldn’t find them and am using regular spelt flour instead.

The translation uses baking powder, but I decided to use instant yeast.

Sodium bicarbonate, that is, baking soda, was already used by ancient Egyptians before the Apicius recipes, but they were used for medical or cleaning purposes rather than for leavening bread.

Yeast much like a sourdough starter was used for leavened bread and cakes instead. 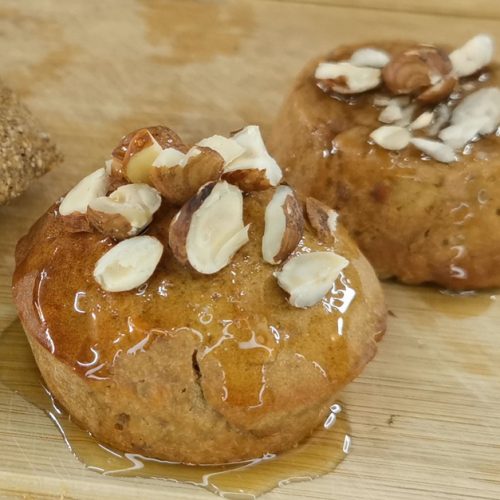 The honey cakes are somewhat like a cross between bread and cakes texture-wise, though I’m not sure if that is an execution error or simply how it should be.

It’s rather delicious, and I think we have a winner here. Though personally, a good old chocolate cake still takes the cake here.

My modern palate more used to sugar says this isn’t quite sweet enough for a cake. I’d also say more cinnamon and rosemary could be added. Then again, those were probably super expensive back in the days.

One could also argue that I haven’t succeeded since I used Roman and not Greek recipes… but I think I did pretty well to figure out the Cerberus honey cakes.

If you enjoyed the article, I would greatly appreciate a donation so I can continue to make more content like this.