This post may contain affiliate links. As an Amazon Associate, I earn a small commission from qualifying purchases at no additional costs to you.

The above video contains references to Genshin Impact, but it is still comprehensible even without having played the game.

Despite its name, Almond Tofu isn’t made with tofu. The tofu part is just to say that it looks like tofu. In fact, it isn’t even made with almonds!

In mandarin, Almond Tofu is called Xing Ren Dou Fu 杏仁豆腐, and Xing Ren 杏仁 is used in normal conversations to refer to both almonds and apricot kernels, which look like almonds and is what you’re supposed to use.

To make things even more complicated, Xing Ren isn’t even the proper Chinese name for almond. The proper name is 扁桃仁 Bian Tao Ren or 巴旦木 Ba Dan Mu, and for whatever reason, most Chinese outside of China don’t know the difference. (In the Chinese made game Genshin Impact, “杏仁” was also translated as “almond”…)

Though a simple translation error, back in 2012 this was said to have scammed Chinese consumers 18.5 billion yuan in buying mislabeled American almonds. Because almonds looked larger and more appealing, consumers bought the American almonds despite costing 3 times as much as local Chinese apricot kernels.

Naturally, those who bought American almonds were pissed, especially since Apricot Kernels hold a special meaning in Traditional Chinese Medicine.

In the 3rd century, there lived a physician named Dong Feng renowned as one of the Three Miracle Doctors in that period. He would refuse money as payment, and instead asked patients he treated to plant apricot kernels for successful treatments; one for minor ailments and five for severe ailments. 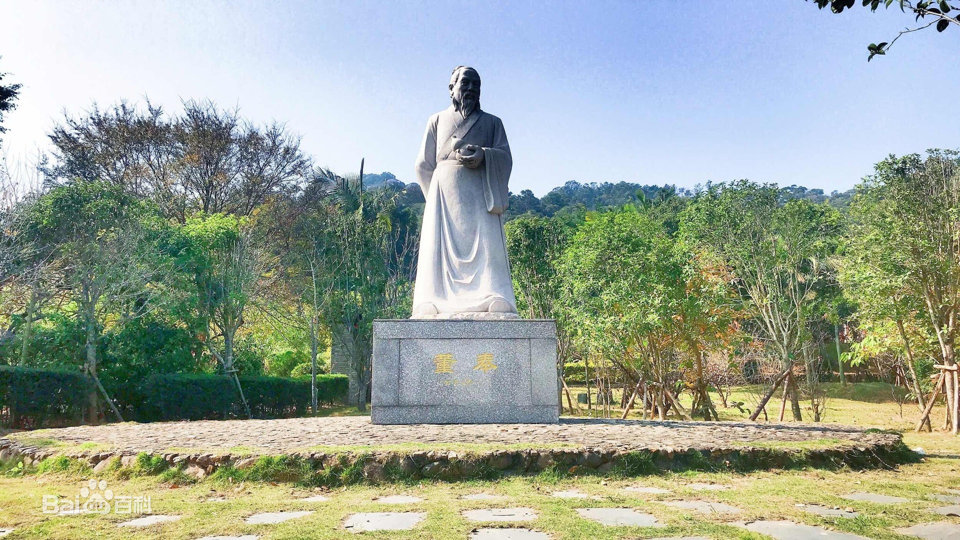 Tens of thousands of apricot trees would be planted by patients to create a lush forest of apricots. After his death, the legend of Dong Feng passed down, and people started associating apricot forests to doctors with noble ethics and superb medical skills.

That is the legend for why 杏林 apricot forest is a synonym for the field of Traditional Chinese Medicine.

Other than that, apricot kernels are also used for treating coughs and is not considered substitutable by almonds. From the 1970s, people also started believing that apricot kernels had the potential to cure or prevent cancer.

Anti-cancer properties are not confirmed

(Please do read the sources I linked and do further research before coming to any conclusions.)

But some other studies say that you’re more likely to get cyanide poisoning.

In fact, here’s some news about people getting cyanide poisoning:

What normally happens when eaten is that amygdalin breaks down into various other compounds including benzaldehyde, which is the main flavouring agent that is extracted to make almond extract.

And… cyanide is also produced. Because plants hate us and secretly want to kill us or smth.

There are bitter and sweet varieties of both almonds and apricot kernels, with bitter varieties generally containing more amygdalin. Only 5 bitter almonds or apricot kernels is enough cyanide produced to kill a small child, and 50 of those seeds is enough to kill an adult.

The almonds found in most countries are of the sweet variety, where the amount of amygdalin is about 1,000 times lower than bitter almonds. So most of us would need to eat about 50,000 supermarket almonds before you die from cyanide poisoning.

Though, certain countries like Tunisia still readily sell bitter almonds, so do take note of the local cuisine depending on where you’re located.

Where most of us need to be even more careful is with apricot kernels, since these are more readily available. There are bitter and sweet varieties, sometimes called Northern and Southern apricot kernels, and both varieties contain at least the same amount of amygdalin as bitter almonds.

Boiling reduces the cyanide content by about 98%, so make sure not to eat apricot kernels raw.

Like almonds, it is believed that bitter varieties contain more amygdalin than the sweet varieties. (Though one of the studies also said there was no clear distinction in amygdalin content. I haven’t found a study proving otherwise.)

(Don’t worry about missing anything important if you don’t play Genshin Impact! This section is only discussing Genshin Impact theory.)

If you have read any Yaksha theories or even just watched the latest story teaser, then you’d know that the Yakshas are a depressing bunch.

Anyway, you can read those linked theories on your own. Yadayada, suffering PTSD after fighting millennia of war and being at the forefront of the bloodshed, that the Yakshas even started killing each other or taking their own lives.

And in the case of the still alive Xiao, drug addiction in the form of cyanide.

In the story quest Wangshu, the Traveler was required to order a “Special Almond Tofu” for Xiao. And what exactly made this dish special? It had the extra bitterness in it. 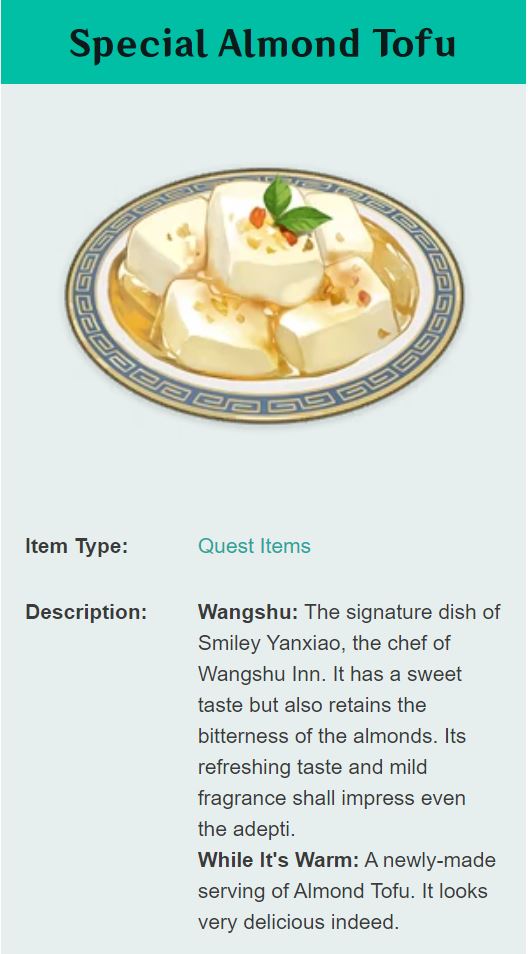 Description for Special Almond Tofu: The signature dish of Smiley Yanxiao, the chef of Wangshu Inn. It has a sweet taste but also retains the bitterness of the almonds. Its refreshing taste and mild fragrance shall impress even the adepti.

Remember that we have established that bitter = amygdalin = more cyanide produced when eating. And this particular one “retains the bitterness?”

In the real-life recipe for Almond Tofu you’ll also see that you don’t need “steady hands”, as claimed by Smiley Yanxiao. Just chuck everything in and it’ll be fine.

Steady hands might be a problem if the “Special” almond tofu needed to have a very specific amount of cyanide though. I guess this former bandit is a little bit more talented than simply having nimble hands. Why else would we need to have Yanxiao cook this instead of the traveller doing the cooking?

Anyway, the good news is apricot kernels and almonds taste similar enough that we can use almonds for the recipe. (They even fooled the Chinese. So… good enough right?)

And this is actually pretty simple in a nutshell: Make almond milk -> add sugar to taste -> solidify it. 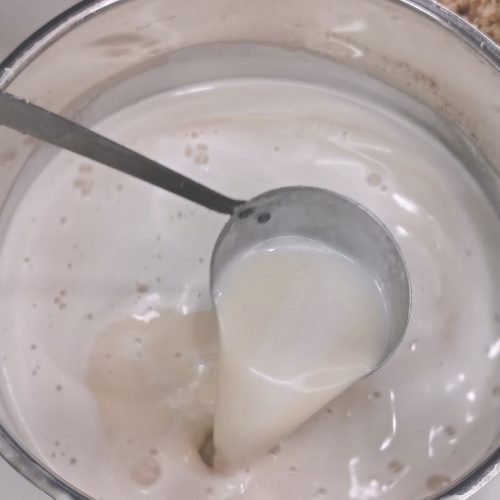 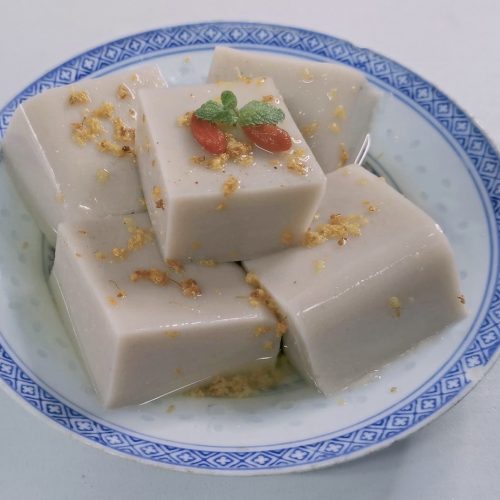 Osmanthus syrup is really easy to make provided you can find the dried flowers, but it takes 2 weeks so I’m using pre-made.

You can also use gelatine but the texture will be slightly different, becoming more like Panna Cotta. There are other almond Panna Cotta recipes out there you can replicate.

Oh yeah, although milk is now a common used ingredient for Almond Pudding recipes, milk isn’t exactly an ingredient used in Chinese cuisine until the 20th century. There’s a reason why Asians are known for their lactose intolerance. For the Chinese in particular, dairy was consumed by nomadic tribes like the Xianbei in the most part of Chinese history. Dairy was never a significant part of the Han Chinese diet until the 20th century.

So while many recipes online with the label “traditional almond tofu” including milk greatly confuses me, you can certainly replace some of the water with milk if you want to.

Anyway, the Genshin Impact players now know what dreams of people they are about to murder taste like.

If you enjoyed the article or video, I would greatly appreciate a donation through my Ko-fi page so I can continue to produce content like this!