Something that’s been bothering me in the game Genshin Impact is that the dish “Northern Apple Stew” looks like this:

Not that many people will be bothered by this but… that clearly looks more like a pork chop than a stew.

It’s missing the braising sauce that would come with stews, and being served with an unproportionate amount of side vegetables just seems to ruin what makes a stew a stew. Well, it’s probably just a very small mistake in the game, but I immediately thought of the legendary grilled cheese rant and wrote a parody of it for this.

A stew is cooked like this. Meat. Vegetables. Cooked slowly in liquid in a pot. This picture for Northern Apple Stew is clearly a pork chop, which is not served with any of the sauce that has collected the flavours of all the braising ingredients. It is also not served with a bland starch like mashed potatoes or rice to absorb the flavours. The fact that this is called a “stew” is nothing short of utter blasphemy.

Let me start out by saying I have nothing against pork chops, I just hate their association with pork dishes that are not stews. Making a sauce after you cook the pork chops? It’s called a pork chop with sauce. Totally different.

Want to add grilled asparagus and some pretentious caramelised onions with sliced apples for textural contrast? I don’t know what the hell you’d call that but it’s not a stew. I would be more than willing to wager I’ve eaten more stews in my 21 years than any of you in your entire lives.

I have one almost everyday and sometimes more than just one pot of stew. Want to personalise your stew? Use a mix of different cuts of meat or change the braising ingredients. But if you want to add some apples for garnish and take a picture of it, make another dish and title it “pork chop” because that is not a fucking stew.

I’m not a religious man nor am I anything close to a culinary expert. But as a bland Asian male I am honestly the most passionate person when it comes to stews and soups. All of you foodies stay the hell away from our stews and stop associating your pork chops with them.

Yet again, it is utter blasphemy and it rocks me to the core of my pale being. Shit, I stopped lurking after 3 years and made this video for the sole purpose of complaining. I’ve seen video after video of people’s Northern Apple Stews and it’s been driving me insane. The moment I saw this blog post this morning I finally snapped. Hell, I may even start my own blog just because I know this one exists now.

Hmm. That was more funny in my head than having written it out and recorded the audio for it. 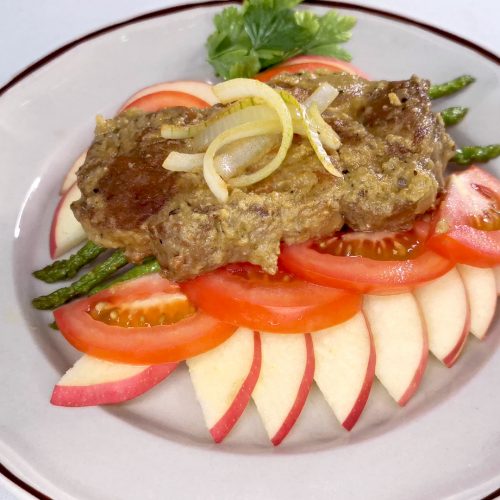